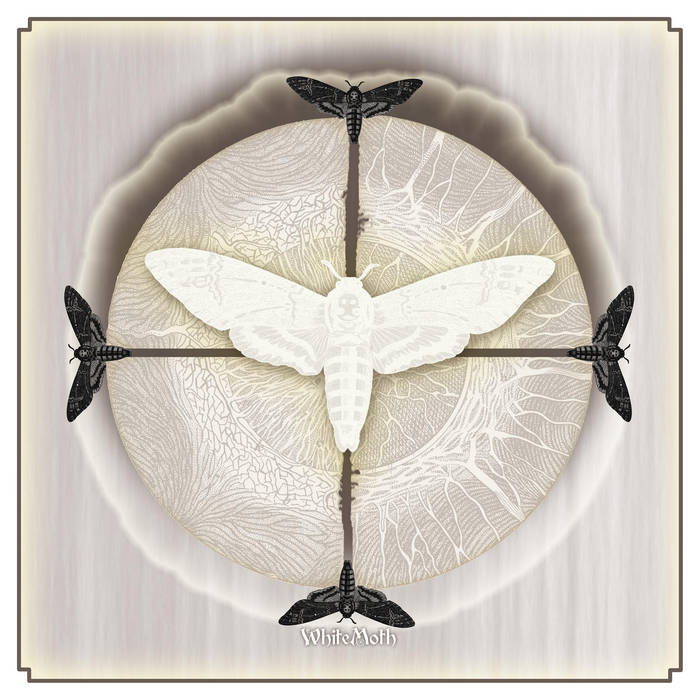 "fifteen winters have passed since my first encounter with the fox. above the fox was white moth, glowing and majestic. scant sleep and a series of startling daydreams have run their delusory course, yet the moth has me focused still, on a distant light. this album is the culmination of those fifteen visionary winters; a milestone on an indefinite journey, much of which is documented here- a series of deeply intimate works crafted with the help of those that have inspired my own growth and musical bloodflow for its duration- which I now entrust to you. lucid dreaming, dark star, and may you be forever drawn to the white light.


The story of the White Moth began 15 years ago. In a REM cycle, maybe, or a lucid moment of acute mental unrest. It was immediately obvious that the Moth was unhindered by those supersensory barriers that (seem to) cleave the disparate planes of consciousness. For all R. Loren knew, the Moth could occupy any or all of the dimensions, separately or at once. It was simultaneously an insect, a metaphor; a homing beacon with which to navigate the imperatives of the cosmic subconscious. So Loren followed the Moth through the cycles, the planes, the patterns; to the far-flung corners of ephemeral cognizance and lingering, substantive reality.

At some point during June of 2009, the Moth led back to something that resembled the beginning—the first flower, the stirrings of artistic impulse. To a cluster of tangled roots that formed the basis of a highly specific musical inspiration. To Alec Empire of Atari Teenage Riot. To Shelby Cinca of Frodus. To Lydia Lunch. The journey continued unabated, charting a course through the faraway locales occupied by kindred spirits like Colin Marston (Krallice), Ashley Scott Jones (Treasure Fingers, Evol Intent), Sam Hillmer (Zs), Jacob Kirkegaard (Touch Records), Christoph Heeman (H.N.A.S.), Dälek, C. Rogers, John Gossard (Weakling/Asunder) and [artwork by] Chet W. Scott (Blood Of The Black Owl/Glass Throat Recordings).

All of whom lent their considerable talents to White Moth’s self-titled debut.

And so it follows: Fast on the feathered heels of his Sailors With Wax Wings project, Pyramids mastermind R. Loren steps across the fold with something completely unlike his previous work. Well, maybe not completely unlike. The sonic linchpins are there, albeit in trance states of perpetual metamorphosis. In this case: frenzied breakbeats, whirring black metal guitars, gaping celestial caverns and hair-trigger hyper-melodies, all punctuated by cavalcades of digitized psychic terror, saxophone jags and dense sheets of whipsaw electronics. The White Moth spans idioms and screeches across margins; it loops and dives, wheels and cranes. Generally (but not exclusively) at top fucking speed.

All told, White Moth is a sonic experience that not only demands but somehow compels total immersion. Meanwhile, the Moth itself—the beacon, the metaphor—continues on its journey through the vapor.

shelby cinca- vocals on 3 and 6

mixed by colin marston at menegroth

additional electronics on 3 by dazzling malicious

Bandcamp Daily  your guide to the world of Bandcamp